Thankfully someone did come up trumps on my emergency call out for Immodium. A great way to start the day, but I was determined that I was not going to miss the day as we were heading out to pop along to different places via different boats along the Mekong Delta and I was really looking forward to it. I managed to sip some coffee and have some toast to put at least something in the tummie as I felt TOTALLY drained from the previous nights events & was feeling a little weak and shakey.

We had a short coach trip to get to the boat that we would be initially heading out into the Mekong Delta on. It was fascinating once we had chugged out of the boat station to see the amount of what looked like rubbish floating on teh water, but on closer inspection and after askiing Hung we realised it was actually a growing plant which is a weed and in some areas is a nightmare to the local farming area.

Our first stop was to a Honey Farm (Bee-z) and a Chocolate producer. Both were fascinating though I am not sure that I really wanted to spend time holding a large piece of Honeycomb with all of the wasps (or were they Vietnamese bees?) still buzzing all over them! Others bravely did and we sampled some Honey tea and a coconut treat before moving on to see the raw cocoa beans and a brief sample of the process of the bean to bar. Having done all of the work with Menier Cooking Chocolate whilst working at Geometry PR it was fascinating to see it all for real rather than on the pages of a book or wikipedia! The chocolate was dark and bitter and delicious and whilst I could easily have taken some home, I pointed out to myself that it was ruddy warm out and that anything that I did buy would surely melt into some form of lump before it even made it back to my case in the hotel! 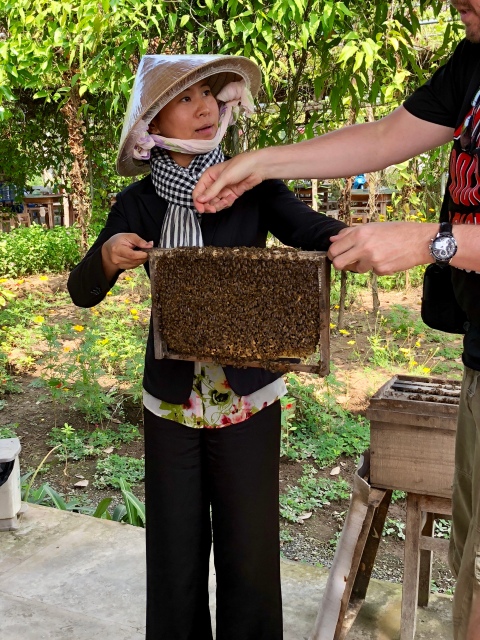 At the end of the trip to these establishments they were very keen to show us thier pet, clearly a hit with the tourists – a MASSIVE python who was aptly named Python! They were keen for people to pose with him around thier neck and for some unknown reason as no one else stood forward, I did. Why? Ive no idea as I detest snakes. They freak me out in Harry Potter yet here I was offering to have an 8ft one draped over my shoulders. Honest to god, I worry about myself at times! So photo was dually taken, it was fine  – i do actually look like i am crapping myself in the photo and that was becuase I almost literally was (the loo was the final stop before getting back on to the boat) The snake was moving across my shoulders as I posed and it was SUCH a strange feeling as his muscles were put into action alonf his body as he moved. I say he, I have no idea if it actually was a he or a she?! I felt very proud of myself – another thing ticked off the random things to do list!!

The next stop was to visit a family-run business that made coconut sweets and some other items. They showed us how to get the flesh out to use in the sweets & they cracked open a large coconuts which was fascinating, if not rather dangerous looking!

Having purchased some of the sweets for work, thinking that they are less likely to be ruined in the heat of the rest of the day, we all tried a number of different fruits some which were delicious and sone that had just THE strangest texture to them. 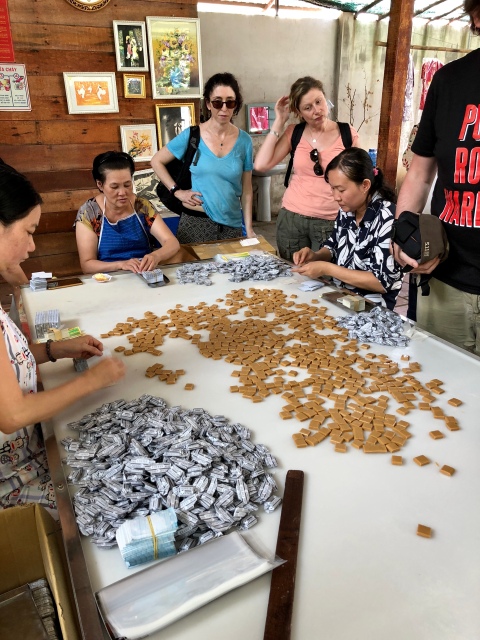 From here we were taken by horse and cart through some of the local area to the next type of boat that we got to the stop for lunch which appeared to be in the middle of no where. But lunch was all laid out ready for us. As we were near the water, unsurprisingly we had fish for lunch. First course was prawns in their shells followed by an Elephant fish which was sort of filleted in front of us. Absoloutely THE last thing that I felt like eating I have to say! My stomachs turned at the sight and smell of it after the previous day/night’s experience.

During our meal, where all I had was beer, we were sat at tables of four and Chris and I were sat with Rosemary and Chris. Somehow we got onto the topic of Morning Glory and Rosemary clearly was not aware of the other meaning for it and was going on and on about the plant in her garden, with EVErY sentence she uttered the rest of us were in stitches, unable to control the giggles, especially as her husband kept trying to get her to stop aware that she was not clued up on the other meaning. I laughed SO much it hurt and I had tears streaming down my face, it was most definitely a case of you had to be there.

From here we were transported in tiny little boats through the amazing bamboo clad waterways to lead us back out to the main point on the delta to revised our larger boat back to the boat station that we had started from earlier that day. 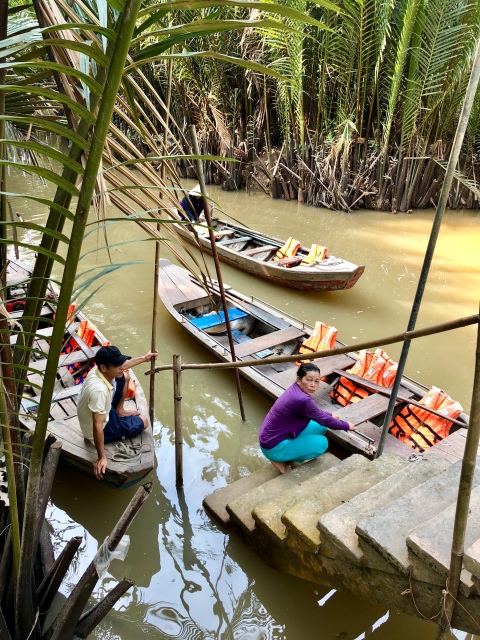 Back at the hotel we had a short while to get ready for the final meal that we were going to have that Hung had arranged the location for, not too far from the hotel. It was above some shops and you walked through a sort of mini supermarket to a lift at the back which only took a couple of people to go up a few floors to get to the restaurant. There were very few others in there when we arrived and they were very slow at getting the drinks out let alone the orders for food. It was here that we gave Hung his tips and I was the one that thanked him for his time and information to help make the trip a great success. Unfortunately I started off by saying how we had all enjoyed our tome in Cambodia – WRONG COUNTRY EMMA!!! As the food had not arrived for many, several of us decided to leave, pay for what we had and try and find somewhere else to eat. We headed to the burger looking place just up from the hotel. Several were leaving early int he morning and so we bid our goodbyes to several, but some of us had all managed to book on to a trip tot he Chu Chi tunnels the following morning which was not part of the Explore trip.

It was lovely to make it to bed feeling a reasonable temperature, even if a tad delicate still and still quite weak. I was proud, and relieved that I had managed to last the day.