← A day in the rainforest
The Final Test →

With such little time in Sydney I was at a loss with what to actually do that I felt that I had used my time sufficiently. Others were talking earlier in the week about wanting to do the Harbour Bridge walk, something that was definitely on my list to do. Not one to miss an opportunity I offered to book it on my iPad ahead of heading down there & so we did. It transpired that we had booked a time slot that was just after some of the others in our group that had booked it separately, almost like we were doing it together!

We arrived at the pylon where the booking centre is well ahead of schedule to ensure that it was all sorted to avoid any bitter disappointment. At this stage I had not seen the iconic harbour view or indeed the actual bridge. As we walked down to grab a coffee and soak up the scenery as it was a simply beautiful day. We have been so so lucky with the weather in general it is ridiculous. For the last 14 days or so Sydney has had the most vial rain which has been very persistent and heavy.

It was on the way down to The Rocks that I actually first caught sight of not only the bridge but also the Opera House. Wow! What a sight! They are both massive! It must be one of the most iconic landmarks in the world & here I was, little old me, standing looking at it. I took a few moments just to soak it all in. Pinched myself that this was all real! 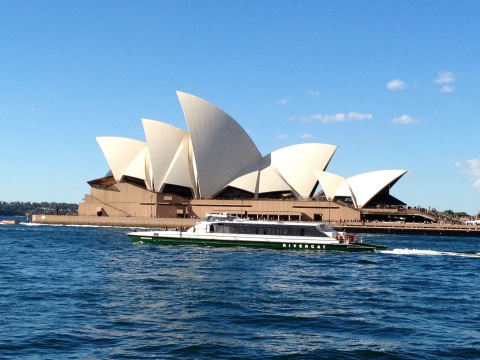 The way in which they sort out all of the kits that you have to wear to comply with the obvious health and safety precautions was incredibly well set out and very clear. We had pretty much everything that we could possibly need attached to our belts which went on top of the really in attractive onesie – but needs must and all that! I led the way behind the guide just in case I was going to need my inhalers which she was carrying as I was not allowed to carry anything. Even all of our watches and bracelets needed to be taken off?!

Kitted up to the nines, off we went. For some stupid reason I thought that we would be walking all the way over and then back rather than up one side to the middle and then back down the other side. Being first meant that I had my photos taken first and then had to wait for the rest of the group to catch up and be done. Good shout. Meant that I had a few moments all on my own each stop to take in the sights before me. I could have spent all day up there soaking it all in. I cleverly tout not to put the lenses in this morning, if I was struggling with them drying out on my eyes normally with the 65km per hour winds up there, I think that they would have literally blown out of my eyes!! It wasn’t really cold as such, just pretty bloody strong. The day was beautiful with an amazing blue sky in the background to make the pictures look even more extra special. Well, sadly they didn’t exactly come out beautifully as we were looking into the sun when they were taken my hair was blowing ALL over the place and my eyes were watering like mad!! 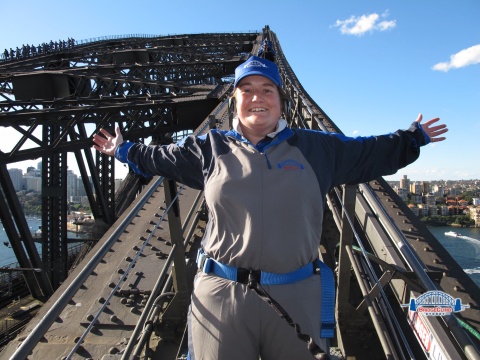 At the start of the Bridge Walk – easy to stand up with out being blown over here!! 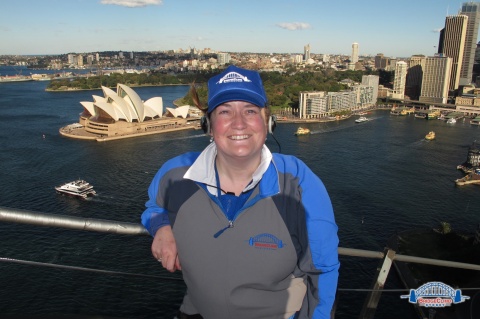 My poor eyes were not doing so well on the top of the bridge where the wind was blowing at around 65kmph and I was looking RIGHT into the sun for this photo!

Coming backdown was a little more traumatic than going up to be honest. The ladders were vertical and the winds had grown, coming down the first two sets were pretty hairy. The worst part by far was sort of shimmying across from one set to the other as part of the handrail sort of disappeared. By the time we had got to the bottom it was all just a distant memory. It’s sad that you can’t take photos from up there to be fair but I guess the website will hopefully show you what some of the views looked like. I was tempted to buy half the shop out of souvenirs but in the end I just got a fake Pandora charm for my bracket as I have one space left, it seemed only appropriate that I filled it with that.

← A day in the rainforest
The Final Test →