I’m not really quite sure where to start with our afternoon of culture in Phnom Phen. I had done VERY little reading on the Khmer Rouge era and Pol Pot’s regime and as a result I think I was even more shocked with all of the information that I absorbed. First off, in the heat of the day after our lunch, was The Killing Fields (Choeung Ek) where I had tried fish amok as suggested to try by H and actually enjoyed it, using quite a meaty fish makes it not quite so fishy tasting which I think might have stopped me from perhaps trying it again.

First we paid our respects at the (Buddhist) Memorial Stupa, erected in 1988, to honour the victims of the atrocities that took place here. This particular location is only one of over 300 locations currently been identified across Cambodia and it is believed that at this location ALONE 17,000 men, women & children were killed. I think I had read about the tower of skulls prior to my visit but had not really taken it in. It was breathtaking, as in a shocking way. It wasn’t just a tower of skulls, it told you on the glass as they were separated into sections by sex, age and what was presumed to have happened to them from the excavations. I spent a while taking in all that these victims were put through by reading the labels on all four sides. 8,000 skulls lie here in sections. Each individual was savagely tortured before being brutally murdered in some of the most barbaric circumstances and this was something that was happening around the time my parents were getting married and up to the first year of my life. Bullets weren’t used as they were considered to be wasted if used to murder in this way. This happened IN my lifetime.

Just see of the skulls of the dead inside the Stupa 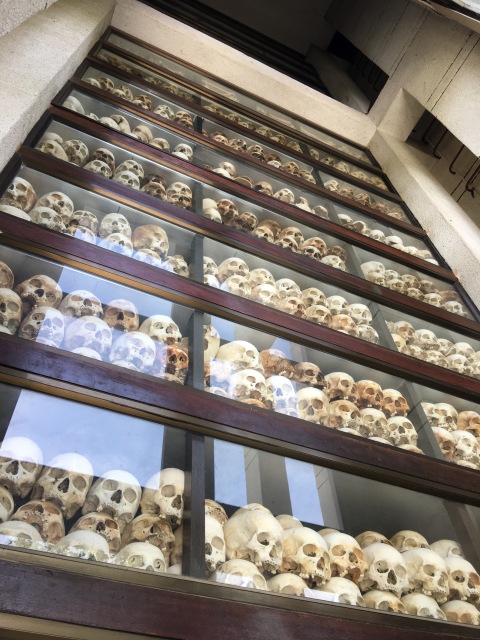 People were rounded up, mainly from what was the prison at the time called S-21 a former primary school that we were going to visit later the same day. Mainly in the dead of night after being blindfolded and brought out here on trucks. Loud music was played from a speaker placed high up in a tree so that the noises from the victims were not heard from neighbours at the time. There seemed to be no specific criteria for those destined for a gruesome ending, if you had a job, were an intellectual and even young, tiny children were taken. All to be ‘re-educated’ they were told after interrogation to learn more – nope taken to be slaughtered. The thing I think that got me the most about this site is that it is still only part excavated. There are still remnants of bones or teeth and sometimes even clothes that have been brought to the surface of the ground through rain and so on. Only in the past few years apparently has the wooden walkway been built as visitors had commented that it was like walking all over their graves to be walking direct on the ground.

There were several mass graves here (only 43 of the 129 communal graves have been uncovered) and areas which had significance such as the tree where the loud speaker hung that played the music whilst the killing took place. The other one that was really really quite hard to take in was the tree against which the youngest children were battered. Sorry to paint such a bleak picture but LITERALLY whacked against after being held by their feet so that their skulls were crushed. Then casually tossed into the mass grave next to it. Bodies would be gayly tossed into the air and caught on spears – as if for fun. It was worryingly easy to envisage and therefore simple horrendous to think of. What totally got me was the information on the age of these Khmer soldiers. I’d imagined them to be twenties upwards ish but 20s being the youngest. Not a bit of it – those that did this to these innocent people were anything from 12-17. That’s ONE YEAR older than primary school. On what level did they believe that they were doing the right thing??!!!! They had to have been brainwashed. I kind of lost focus on the info from the guide trying to absorb all the information and more to the point process it. I have some fairly harsh reading to do on my return to fill in the gaps. 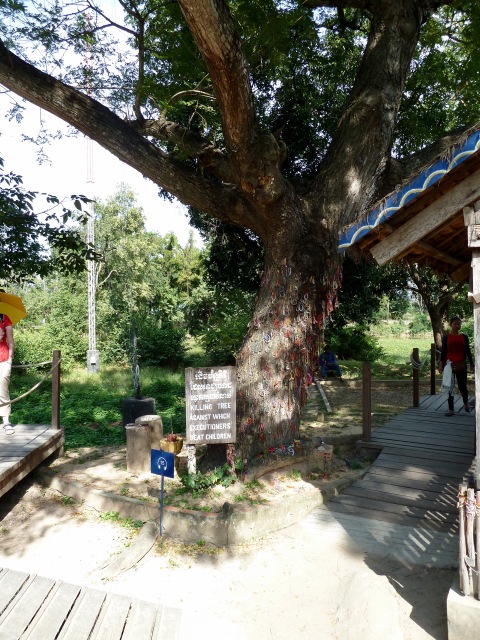 This was the tee, as the sign says, against which children were beaten 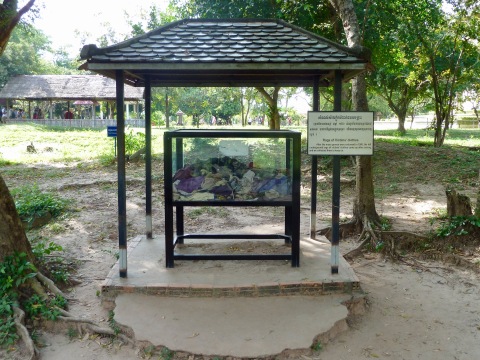 One of the many mass graves discovered at the site

It felt awful taking photos of the resting places but it’s important to share the information I feel. Our local guide, Sam, has a few grandparents, Aunts, Uncles and cousins still unaccounted for from the genocide. No remains have been found so they have no inparticular place at which to remember them which, to me, must be one of the hardest things to come to terms with, but the larger memorials to all victims offer him & his family some small amount of solace. Just hearing our guide’s information from the horses mouth as it were, from someone so closely linked to the atrocities kind of made it all hit home a lot harder. Watching him take a moment at each individual board and spot on the site having told us the gruelling information was heartbreaking.

Our final but if culture for the day and indeed year was S-21 the Security Prison which was once Tuol Svay Prey High School. It soon became the largest detention and torture centre in the country holding over 17,000 people between 1975-1978 the majority of whom then all were taken on to the Killing Fields as I mentioned before. Similar to the Nazis, the Khmer Rouge kept a record of every single victim that passed through, some even before AND after their torture. One of the blocks today, B I think it was held rooms and rooms of the individual cells taken out on the bottom floor and boards with faces upon faces of the headshots of the victims of the regime like some sort of glorification or proof of their barbarism. It was sick. Utterly sick. All of them dead behind the eyes, the womens dark hair all chopped off to a bob cut about earlobe level. It was just too horrific to think that of all these faces I was looking at virtually all, bar a handful, were later killed. Even foreigners in Cambodia at the time were inflicted under this regime with some photos of Australians, Kiwis and some from USA in amongst the head shots.

In the latter stages of the Regime the insanity stepped up a level as the torturers were taken over by others who in turn them tortured them. Come 1977 the prison was claiming an average of around 100 victims a day through starvation and torture. But one of the most shocking this is for me which I really hadn’t taken on board is that a huge percentage of these barbaric beings (the Khmer soldiers) now live as ordinary people in Cambodia with few, to no one, aware of their involvement of the regime. Some are being brought to justice and the trials are on going for some, sadly too some of the bastards have since died of natural causes. I find this so grossly unfair in comparison to the number of murders they will have each completed yet they state that they had no idea what was going on.
I, for one, couldn’t do much more of the gruesome images, the constant reminders of the past with the descriptions of the types of torture that was undertaken and the ‘rules’ at the prison. Thankfully we were coming to the end of the tour with our guide and offered free time for a further 20 mins or more to take in the remainder of the site. This was just before meeting two of the prison survivors for that time. I did the tourist thing I’m afraid and had my photo taken with & paid for both of their books of their ecprriejce, memories and indeed life since. I’ve already read a few pages of the first gentleman’s (Bou Meng) who managed to survive as he was a painter and painted portraits of Pol Pot as his means of escaping being re-educated. What the hell do you do when meeting these people? I greeted him with the typical gesture of palms together fingers pointing up and quite high on my chest as a mark of respect. I apologised for what he suffered through, bloody stupid thing to say in reality but my heart was in my throat. I had tears welling up in my eyes as we hugged, squeezy BIG hug and he kissed me on the cheek & said thank you, thank you. A mere flash in the pan but it just seemed to kick me into touch. There was a second survivor Chum Mey (there were 7 originally) with his book there and I too purchased that. I have some fairly hideous films to watch on my return.

A Block where the worst seem to happen

The ‘Rules’ No 6 being simply the worst 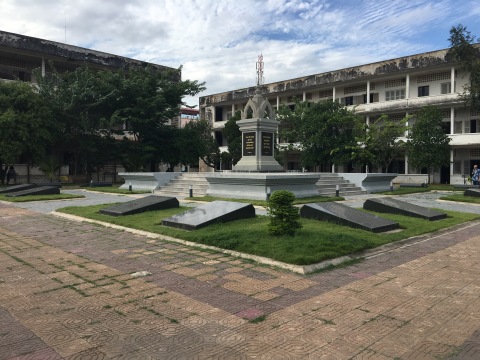 The Modern Day Memorial to those killed at the Museum 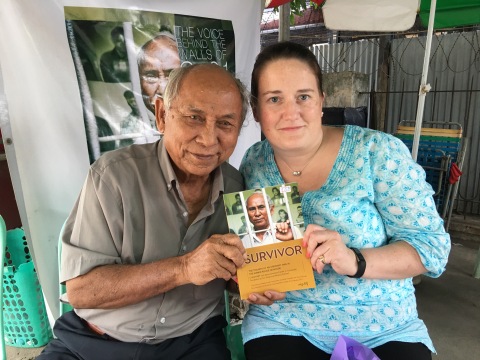 Chum Mey who survived as he was a mechanic, able to fix the broken typewriters on which his torturers used to record their forced confessions. 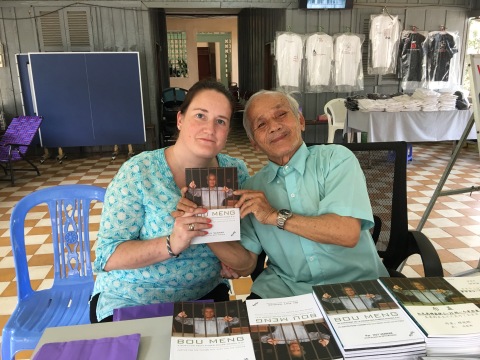 With Bou Meng – how can you smile in photos like this? I didn’t know what face to pull as such

Further beyond the two survivor was another playground area if the former school where you could just envisage the children kicking a ball around. Only in the last year or so has a memorial been built here with plaques with all of the prisoners names on, the photographs and information of whom is in existence from that time. I just stood quietly and strolled round the area. I popped into one of the buildings to see the size of the individual cells but didn’t brave it to the other higher floors where the rooms of victims were larger and more in them. The bodies of the 14 that were in the torture cells at the time of the Vietnamise invasion in 1979 lie in white coffins in the first courtyard are just outside the cells in which they were found. Quite a depressing visit to end the year on but none the less eye opening and fascinating. Looking at the population of Cambodia today there is a very small percentage of elderly and you only really see those younger than me as anyone older was simply wiped out.

Questions to find out the answers to back home:

Why did the Khmer soldiers slay so many? What was their motive?

What would they gain from doing this?

Why was Pol Pot himself not put on trial/murdered himself?