Match day came around once again and my nerves were in full flow! The not knowing for definite if I had a ticket for the match combined with the actual nerves for the big match itself was making my tummie rumble something chronic. I had a catch up call with Fliss on how the day was going to work and what we have been up to and checking in that all of my group are ok. Thankfully she confirmed that we definitely both had match tickets for this evening – one less thing to be nervous of! She also said that we are two tickets short for the final test and that as Vic wanted us both there I needed to go out and find two.

Down I went to concierge to find out where the Australian equivalent of Ticketmster office was so that I could go down and buy two on the credit card. They also looked up for me that there were some available but that they were single tickets and couldn’t see from the online booking system where they were, as in how far away from each other. I found out where it was and, in Challenge Anneka mode, off I went searching the streets of Melbourne for the office. Well it wasn’t where they had told me but I went into the theatre where I had been told it was to find out where the office really was, they pointed me in the direction of the office that is located on the edge of China Town which shut at two.

Now most of you already know I don’t do running as a rule. But if it was a case of getting a ticket for the final test or not, running it was going to have to be! So I ran, and I mean RAN (like running for my life ran), across town to make sure that I got there before anyone else got the tickets and the place closed for the rest of the weekend. I was possibly the actual colour of the Lions shirt by the time that I reached the shop and dripping with sweat & gasping for breath. On further looking it transpired that the two single platinum tickets that they had were not only one behind the other but they were also both on the aisle. Could not be more perfect if we had tried. Done. Bought. I confessed my undying love to the elderly gentleman behind the counter who did look somewhat bemused with my admittance. Tickets in hand I gently strolled back to the hotel, taking in some very big breaths to try and recover from the over exertion of the trip to buy the tickets! Happy to have the tickets not only in my pocket but also confirmed for the final test. Once back at the hotel I had to have a lie down to try and recover and get my heart rate back down to something resembling a normal rate!

Pre match hospitality was in a venue space in the Docklands area which was pretty much bang next to the Ethiad Stadium. It was rather a random place and not the easiest to find – I was very glad that Fliss had given me a few directions as to where it was once we got off the bus as it was not easily labelled! We had an open bar for 2 hours before the match and some sensational nibbles including individual portions of fish & chips. As Sophie & I had fed up with pasta pre match I was not really wanting much to drink. I got very edgy as I didn’t have my ticket in my hand still whilst we were in the Black Sail Bar until very late. The obligatory photo of it was of course taken and posted on Facebook! 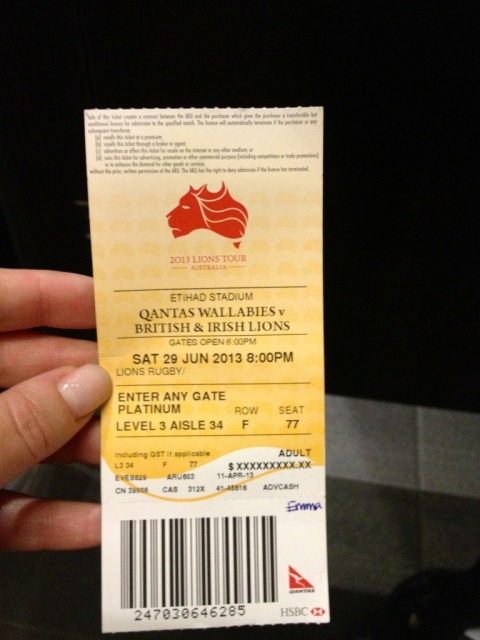 Just a little excited to actually have the ticket for the match in my hand!! (with thanks to Lesley for the photo!)

Having played ‘heavy’ on the door for the majority of the evening it was lovely to be able to mingle for a little for the last hour or so before the match. Shared the joyous news that I had in my hand the ticket and if I recall was to be seen stroking it and kissing it at one point! There’s always one!! Lovely to see some of those that have been further afield and to catch up with the couple that I was sat next to at the welcome dinner on the first Friday night in Brisbane, which now seems months ago.

The advert that caused a lot of controversy out in Australia

We headed on over to the Ethiad Stadium, a short walk along the dockside and the masses swelled as we got closer with the atmosphere booming and becoming more intense the closer that we got. It was amazing. There were loads of people handing out #seaofred try signs and red face paint – a brilliant idea I have to say. But I’m not sure that it will quite top my face painting efforts in South Africa?! We managed to pick up a few of the Australian bright yellow hats that were being handed out in a hope of stopping the Stadium being the sea of red again! The chants coming in had me in stitches – #you’reonlywearingyellow’cosit’sfree. We purchased the desired programmes and made the trek up to our seats stopping off at the facilities first – the ladies I never had to queue for in the stadium, but the men’s were absurd!!

In my seat I just soaked it all up again. Looked at the sea of red, took in how little effect the yellow hats seem to be having. Pinched myself that I was actually here, that this is all very, VERY real and savoured the moment. I still, even though I am in the middle of it, can not believe that this is all happening to me. That I am actually doing this, it’s all still very much like I am in a dream and that I am going to wake up every moment to Geri nuzzling into my neck as my early morning wake up call like she does.

Then the photos for the mementoes started. 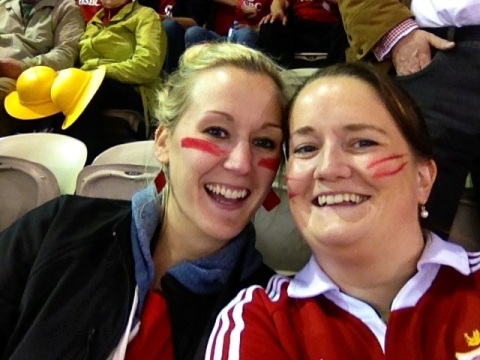 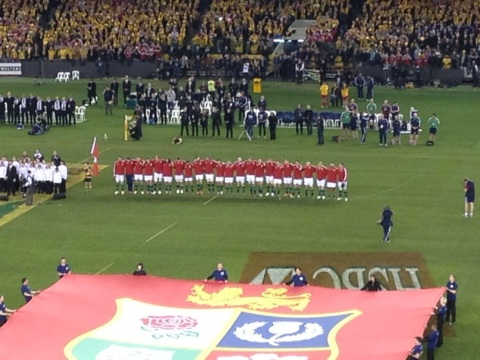 I was sat next to Soph for the match which was fabulous. I was so nervous in anticipation about what was about to happen on the pitch in front of us, just in the bottom of my tummie I could feel this horrible notion that we weren’t actually going to be able to do it. I could see it being like so many of the Bath disappointments that I have seen over the years. When on paper we should be able to, but when it comes down to it – nope. Just wasn’t pulling together.

This was the last kick of the match I think – not at all into it or anything??!!!

Sadly come the end of the match that was exactly what happened. We were unsuccessful & theres a stadium full of Australians that were over joyed. Man, was I thankful that I had actually run out this morning to go and buy the two extra Sydney tickets. There was no way that there would be any left now!

My group were all present, correct and waiting for the nod that the taxi was here, we had no stragglers or anything and I had them all on the bus and singing songs whilst we sorted out what the others were all going to be doing. All a job well done on the organisation front, lets just hope those on the field can be as well organised for the final test, hey!!