Another New Years Day on the water

2017 was welcomed in as a group with dinner on the River Front in Touk to see the masses congragating outside as well as the fireworks which seemed to begin off all over the place including from boats on the River.

I seemed to set a tradition for myself by finding myself on water for the second New Years Day running as we took tuk tuks down to a river boat as some of us took the optional extra of taking in the views of the city skyline from the Tonle Sap Lake and the Mekong River over to Koh Dach which is known by foreigners as ‘Silk Island’. The life is far more rural and rustic compared to the hustle & hustle of the busy city and moped & tuk tuk laden streets.

As you can imagine from the name a lot of silk weavers inhabit this island and we were here to visit them, do some shopping and find out more about their fascinating trade. We heard all about how the silk is made and the cycle of the bug to cocoon to moth to egg to bug etc and saw how by creating the cocoons is where the silk comes from and what they have to do to get the various forms of silk – as in raw, fine, coloured and so on. It was amazing to watch the ladies at work all hand made silk and cotton that would take a couple of days work to create such beautiful end results. 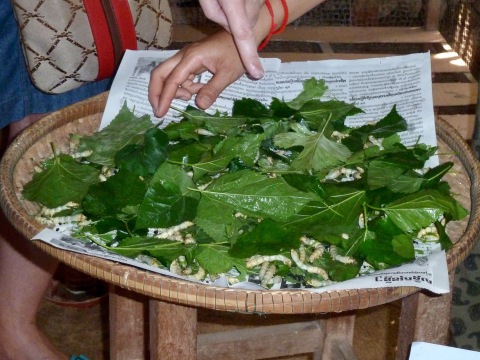 It was baking hot it must be said but that deterred none of us from shopping for a bit of silk. We were told why there was cheaper & more expensive piles – one was factory made and some were handmade there. We all flocked to that table to ensure that the money that we were paying was supporting the family and local economy rather than the factory made goods. It’s an amazing craft and I could have spent hundreds of dollars on gifts for all they were all so beautiful.
From here on the island we walked on a little bit further to see the Pagoda and temple. I don’t know but it kind of gave me the feeling of being in a neglected theme park with statues all over the place looking weathered and a big reclining Buddha. We saw a monk wander past evey now and then as Art was telling us more about the religion of Buddhism and how most Cambodians have volunteered as monks at some point in their lives. Be it a day, or two. A week, or two or indeed a month or two. There is no time limit as to how long you need to be one for. He was also telling us about how he went to a school taught by the monks as a child and how his parents are illiterate which fascinated all of us. 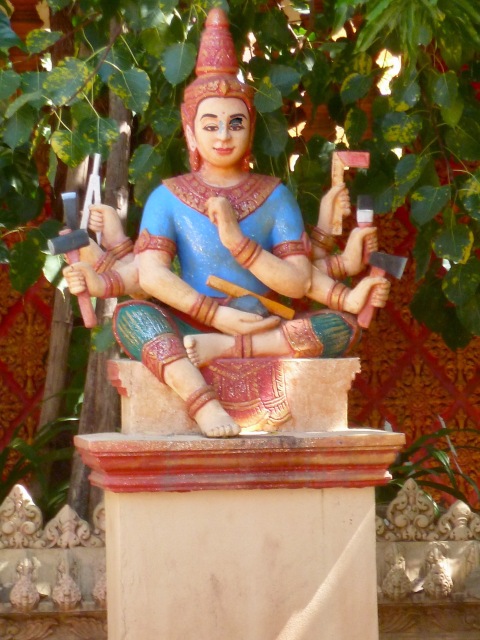 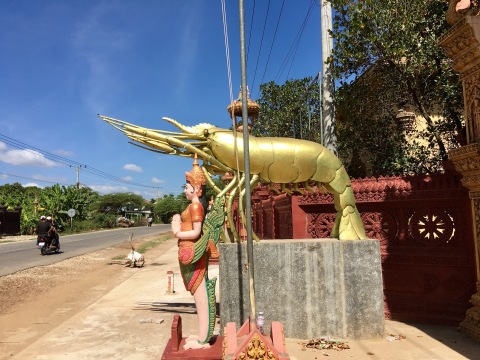 We were all melting at this stage, the sun was at it’s peak and we were all feeling it quite strongly. The beads of sweat were even starting to appear on my eyelids which is the strangest sensation ever!! We headed back to the boat and the journey back to the mainland for mid afternoon. Did spot this guy taking meter readings which did make us all giggle!

We headed back to the hotel on tuk tuks again from the boat, many more people were on the road this time being later on on New Years Day. Once at the hotel we visited the facilities, put our scarf haul in our rooms and headed the around the corner to the Friends Cafe for lunch. Much needed and such a lovely place similar to many of the giving back style cafes that I had read about in the guidebook.

Some of us headed to the central market to pretty much take in the tat! It reminded me of the market that we went to in Beijing after the Great Wall. I managed to pick up a few bits including a hat which was going to be an absolute life saver over the following few days as well as a small rucksack as I’d not got one with me – couldn’t find it anywhere before I left. Also picked up a  T-shirt, some magnets & a couple of beautiful bowls made out of dried coconut that had I seen at the S-21 museum but that I simply couldn’t buy from there as I didn’t want to remember as the place where I brought it from.

We had our evening in Paddy Rice followed by a massive ice-cream in Blue Pumpkin on the way home – amazing, but could have done with it at about 5pm when I was literally melting!

Cruising the Caribbean on a catamaran

Im not sure if there really is a better way to spend the first day of a new year other than chilling out on a deserted island. This was one of two optional extras some of the group had made the choice of a trek into the countryside and a visit to a waterfall over a catamaran trip out to Caya Blanco. As much as I’d have loved to have had the time to do both I had been looking forward to this trip especially from the moment I booked the trip. ﻿

It was a fairly smooth ride over to the island where we were to be spending all day. There was the option to go onto the island straight away or stay on the boat and do some snorkling a bit further round. A few if us decided to settle on the beach over the snorkling. I’m not a massive fan and there were not that many to go round the entire boat. We got the drinks in and enjoyed the peacefulness of the island.

I made a run for the sea – it was just calling me – mid way through a conversation with Dot. Throwing clothes off as I got closer. The water was warm and crystal clear and the sandy beach was white. Picture postcard beautiful. The only disturbance was the massive amount of hermit crabs crawling literally everywhere. Quite off putting in case one randomly climbed over you. 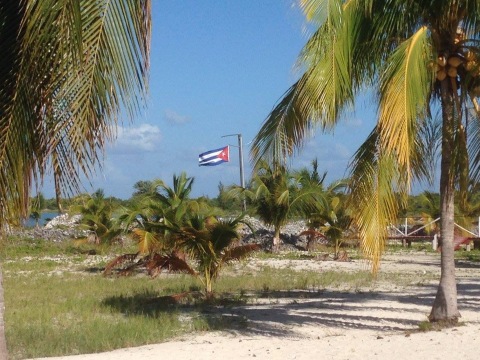 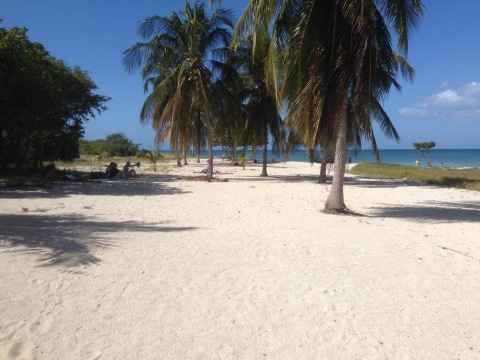 Here Dot & I can be seen putting the world to rights after several rum & cokes!!

There was another lady not from our group who was enjoying the tranquility of the location as well but when some of the others were chatting and giggling in the sea she shushed them. Never shush a giggly girl – it will just make it all much worse! I think the house level raised a notch after that!!

We had lunch on the island as well and it was lovely to be in such heat by the water. The iguanas behind the kitchen were really quite amazing, such prehistoric looking creatures surrounded by a carpet of the hermit crabs of all sizes.

​​
Once we had our fill of the sunshine and turned a wee bit pink we headed back to the mainland on the catamaran and thankfully the coach was waiting for us to take us back to the main square. We went to try and find the place that we saw selling ice-creams yesterday but sadly it was closed which was a real shame. We did, however find some pretty impressive Pina Coladas which most definitely did the job and as a result we had to have two rounds of them!! Delicious

Pina colada’s – the best ones EVER, made even better by the awesome company