The penultimate night of the year was spent on the overnight train from Hanoi down to Hue. A 10 + hour journey. We boarded the train for a 10pm departure, unsure of what jollities lay ahead, apart from the fact that I was highly unlikely to get much sleep!

Split into couples in one 4 berth, the boys (with Hung) in another, 4 ladies in another and the remaining ladies (myself included) in the final with a random stranger that could be male or female – there was no knowing. The higher priced tickets (that we had) involved a ‘soft’ bed in a cabin with bedding, water and a wafer biscuit included. I was VERY thankful that we weren’t in a lower class where we could have literally had a board to sleep on – oooo the thought!!! 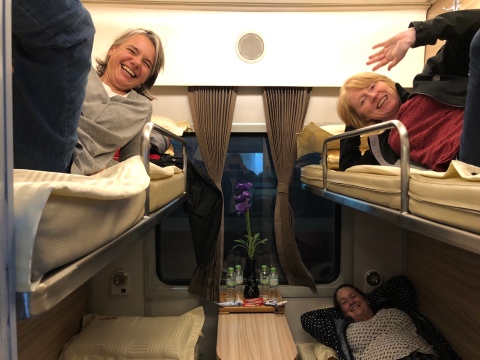 Thankfully we had a lovely lady join us in the cabin who was the tour leader for a group travelling with Intrepid travel doing a similar thing to all of us. She had her work cut out though, come the morning time there were several of her group who had been drinking all night & were to be found in their bunk lying in the foetal position!! Her comment to it was, oh well, they are Australian (as if that explained their behaviour!).

We suddenly realised that beers were needed to be purchased before the train moved and spotted a little shop on the platform and so Paul, Chris and I darted off to go and get a few each. Not that we were planning on getting plastered but more that it might help us sleep. I didn’t really fancy the idea of getting up umpteen times in the night to try the loo. Many a giggle was had as doors were ‘jammed’ shut and the general hilarity of the sleeping conditions got too much. There was no elegant way to get up and down from the bunks and I was glad that I was a demanding madam and requested bottom bunk owing to my insomnia/ often need to visit the loo in the early hours – TMI? Oh well!

The morning came and I guess I must have got some sleep – amusingly the Fitbit begged to differ and recorded precisely none despite repeated synching as a result of not quite believing it! The night had been entertaining all round, mainly so on the comments from Hung who said that he didn’t realise that it was actually possible for anyone to snore louder than the noise of the train 😂 and that he had 2 hippos in his cabin ALL night!!

A fun must-do experience for sure but I’m not sure I’d want to travel a country purely by sleeper train like this as I’d get LITERALLY no sleep – even according to FitBit! One of the group was saying how he thought it would be a lovely peaceful way to travel – and he too was sharing with the so say hippos. Each to their own I guess!! I’m quite happy that I turn 40 soon & REALLY don’t feel like I’ve missed out in life by only encountering this experience whilst 39!