← With Love From Rio!
The Brazilian Side of the Falls →

Greetings from Foz do Iguacu

Yes it is little old me again. Thank the Lord I am out of that dive of a city otherwise known as Sao Paulo. My god what an utter dump, I don’t suggest a visit to ANYONE.

In a much more pleasant place now as you can read from the title which was a 15 hour bus journey over night on a VERY uncomfortable bus on a VERY bumpy road. Not something that we will be doing again in a hurry, at least we know now why there was such a huge price difference between the two bus times that we were quoted! No blankets on the air conditioned bus and so stone cold, not the best temperatures for trying to sleep!

We are staying in a pousada, which is basically like a B & B and Laura, the woman who runs it, is as mad as a hatter but lovely too, always wanting to help and sees us as her children. (Pousada da Laura 574-3628 Rua Naipi Nr 629, Foz do Iguacu, Brazil) We left at about 9:30 this morning and popped in here (an internet café!) as it was open on our way home this evening, we reckon that Laura will be pacing the floor waiting for us!!! It is unbelievably cheap staying there although Brazil obviously doesn’t go in for hot showers and I am getting really sick of cold showers. Even more so now that it has turned like British weather, not really what we were expecting here, we knew that we would get it in Buenos Aires when we get there. So Chloe has one of my jumpers and I am sleeping in one and my waterproof has not been taken off in a while! I am surviving though, the difference in the temperature between here and Rio is just so unreal. Who would have thought it was so hot in Rio that we could have been walking around in bikinis, not that any one would have appreciated the sight of Frosty the Snowman, at least the others could have spotted me at a distance if needed!

Went to the Itaipu Dam yesterday, which is meant to be one of the 7 wonders of the modern world. I had seen loads of pictures of it with the water flowing through it but there was none when we were there and so I am afraid that it did nothing for me in the end. I am glad that I have been to see it all the same. The bus journey was a little random. We were dropped off in what felt like the middle of nowhere and we were pointed in the direction of the dam and walked for a little while (400m) before we came to it. It was just a really bizarre experience. (Itaipu Dam is the world’s largest hydroelectric works. It cost US$18 billion for Paraguay and Brazil (it is on both of their borders) and has the capacity to generate 12.6 million kilowatts, which is enough electricity to supply the energy needs of Paraguay and Southern Brazil. There is so much concrete in the dam that it could have paved a two-lane highway that started in Moscow and ended in Lisbon or 240 Maracana Stadiums! The dam has created a 1400sq km lake due to the destruction of Sete Quedas, which was the world’s largest waterfall with 30 times more water than Iguacu. The local weather patterns and populations of plants and animals have been affected but the complete environmental repercussions of these changes will not be felt for decades.)

We met a really nice Ozzie bloke (James Liddy) in the pousada and we went to the Argentinean side of the falls with him today as it is quite a trek and he had done it before, so we thought that it was wise to go with him instead of getting totally lost by doing it on our own! There and back we got onto 13 different pieces of public transport, 14 if you include walking! The views though, Oh were they worth it or what?!! I have absolutely no intentions to try desperately to go to Niagara Falls now after seeing them. I mean, I really can’t explain the views; they were just out of this world. I could sit here and try and try but you will just have to come and appreciate the awesome sight that they are for yourselves one day. I am glad that I had my stupid waterproof on, even if I did look like a bit of a fool, as the spray from the falls was very intense at points as I am sure some of you will see from the photos (If they come out!). (The Argentinean side is known for its close up views of the falls and the forest that you can walk though to see the falls. There is a shuttle bus that takes you along a dirt road a few kilometres from the park entrance to Puerto Canoas. From here we took a hair raising boat ride to Garganta do Diablo (Devil’s Throat) where 13,000 cubic metres of water per second plunge 90m in 14 falls arranged around a little pocket. The view was amazing but I am sure that it would have been even better in the sunshine. The sound of the roaring water, huge rainbow arcs, drenching mist and in the distance the sound of parrot and hawks cruising over a deep green forest, can you dream of anything any better than this!?)

We are going to go to the Brazilian side of the falls tomorrow and we are going to get a helicopter ride over them, which will be fantastic. I just can’t wait! We are also going to go to the bird and butterfly sanctuary tomorrow too, hopefully, as I am really keen to go there. I think that other than that we are going to do some washing and relax before our next big move. I think that we are planning to leave here on Friday at some point and head over to Asuncion in Paraguay for a couple of nights, just to get another stamp in the passport really and also it looks like it is meant to be really beautiful. We may come back into Argentina then to the Jesuit Missions somewhere that is in the vague direction that we are going in. We saw pictures of them at the bus station today on the Argentinean side of the falls and we all seemed fairly interested in them.

I think that is pretty much all my lot for now, enough to wet all of your appetites for what I have been doing in the last couple of days!

Keep well, and keep emailing, it is always nice to feel loved every time I come to email instead of just having a load of junk mail waiting for me!

Lots of love to one and all, postcards are on their way, I keep forgetting to take them out with me! Start buying your magnifying glasses now as I am warning you some of the writing is VERY small indeed!

SAM – Didn’t think that they were you at all, I was rather confused, thought that you had some weird side to you. Girl sounds like a right cow!

FARTS – Cheers for Big Bro updates, how about Eastenders? Other news is cool too, looking forward to hearing more about that. It is a horse, a white one apparently, it has been bugging Chloe and she thinks that it is called Artex. Could you please confirm? We have another task for you part of which we know the answer to. Tee hee hee – wait and see! 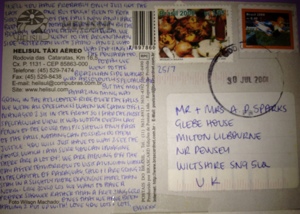 ← With Love From Rio!
The Brazilian Side of the Falls →