Breakfast was once again the same old but no rice until they brought some out for Stace instead of the toast for her wheat allergy, luckily she couldn’t eat it all and so I had some to help her and get some slow releasing energy as I could see that this would be another pretty hard day as it was a day of steps, so we will see!!

I was totally dripping after we went the usual way, leaving some of the quicker ones to go on and do a bit more as we have been holding some of them up all week. There was just Elaine, Stace, Peter and I and we were able to go at our own pace without feeling pressured to need to go any quicker.

It was great, it also meant that we were able to really take in the beautiful scenery, even if it was a little misty in places and really enjoy each others company. Some of the parts of the wall were really crumbly in parts and really was quite tricky to navigate where you needed to put your footing. Parts were really quite steep too and so it was more a case of scrambling up them!!!

We had some hawkers that had followed us but seeing as we didn’t need a guide or any packamacs they pretty soon got the message but yet persisted to walk with us. It got really quite annoying but Peter promised me that they would leave of their own accord soon as they would see that we don’t need or want their help or anything that they were selling. Thankfully, several watch towers and some of the evil eye looks they did manage to get the message and eventually disappeared. The bonus of this section of the wall was that some of the towers were covered and so there were plenty of opportunities to pause and dry off a bit mop up the drips mainly!! The temperature had dropped quite a bit which was bliss to put it mildly despite the fact that we were all dripping wet and sweaty too to put it mildly.

There were some really seriously steep sections which were totally broken and it was easier just to use my hands at times to be honest rather than the blasted poles which, at times got seriously in the way!!! I could hardly move my legs up the REALLY big steps I kind of had to move them manually which does not really bode well for the pain this evening or even in the morning really.

Lunch was in the last tower before the descent and the spam sarnies were seriously not going to be eaten – the mere idea of it makes me feel sick I am afraid. I’d rather go hungry, I was really not that ravenous! Triple decker ones as well – lucky us hey! AND two of them as well. I just stuck with two cereal bars one of which I had at an earlier tower and one for lunch, knowing that it was not really going to make me starving when I got down, just make my knees ache and as for the balls of my feet, ouchie! We did our surprise for Lynnsey which we hope that she will like. We took some photos of the ridiculously steep steps up which we were almost adamant was the same place where THAT photo that Stace found was, it was entirely hellish as it looked as well having now actually done it myself!!!

(the third boob was my camera – totally forgot it had a rain cover of its own! Mark one day I WILL get you back for that!!!)

Stace and I started off first behind Michael my thought being that downhill is mainly my downfall and if I had a small head start ahead of the others that meant that they might catch up and we could all arrive at the same time at the bottom. Basically to cut out more detail of me walking down steps; I was at the bottom FIRST!!!! wooooooo hooooooooooooooo – GET ME!! Ok my legs made me feel so crippled it was absurd but I did think that it was wise to partake in the stretches to cool down even if both of my legs had the total jitters!

We had another hour or so coach journey before we were at our accommodation for the night and by the time we had got there if was absolutely chucking it down with rain! We got to our doom amused that there were Ikea mugs by the kettle but not so amused that there were cockroaches around the door. We had a decent amount of time to freshen up and repack and so on before supper which was at half 6 as we had a fairly early start in the morning so that when we finish tomorrow we could head back into Beijing at a fairly reasonable hour so as not to get stuck in hours and hours if traffic.

Supper was pretty much the usual sorts if dishes, my god I am getting sick and tired of not being able to eat many if the meat dishes because if the amount of peppers in everything. There was a rather nice aubergine dish this evening but I think that the most random thing on the menu this evening had to be the tender leaves fried in tempura batter that looked just like they had been cut off a near by bush random and most bizarre! We had a table of Chinese in the restaurant with us who were making so much noise it was insane.

We could hardly hear Michael when he was going through the plan for the following day and trying to get an idea of what everyone wanted to do. It turned out that they were obviously doing drinking games as a couple of them could hardly stand up at one point. I don’t know why it reminded me of Squeeze the Cheese, our usual evening of drunkenness. I think probably because the sight of the friends all drinking together and laughing with/at each other, it made us really excited for our Fri eve after we return. Such a fitting way to celebrate our achievement, seeing as my folks are off to France with friends on the same day – they won’t be doing much! It was something to look forward to when we get home, important for me at least as I know full well that there is going to be a low coming but with that and Italy away trip to look forward to, I hopefully won’t suffer too badly. This evening made me start to think as it is the last day tomorrow, about going home, and I started to realise that I really didn’t want to. Imagine what I would be like if I was having to go back to Invensys? I hate to think to be honest.

After supper we headed out in the POURING rain to a bar, a karaoke bar, a random little place which had loads of Christmas decorations in and a little stream with fish in it running through the room. All a little odd!! We had a few renditions from Michael, who clearly loves his karaoke bless him, and was actually quite good, Sasha and Peter sang too. I even got up and did a couple – Total Eclipse of the Heart being my favourite :0) Elaine and I did that avec bunny ears – I’m sure that they made ALL the difference!! Once we had done our bit we swam back to the hotel as the rain had not stopped once. I couldn’t believe that it was the last day of walking in the morning. Quite a surreal feeling. 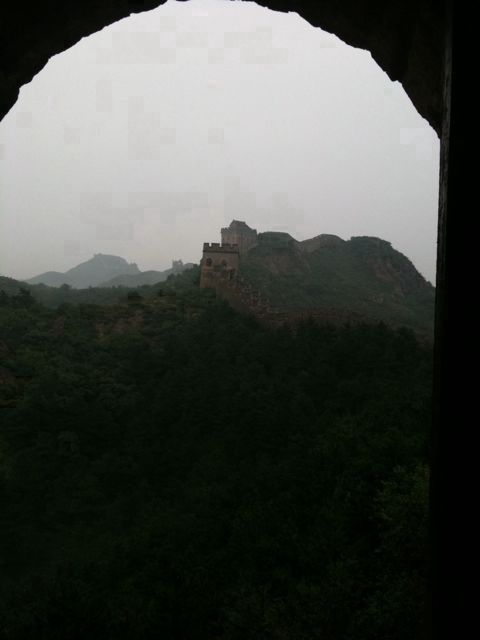