After a fairly late night (all things considered) having decided that my toe nails needed painting just as I was about to crash, I woke earlier than the alarm. Excitement brewing! Looking at my bags I am not actually sure that I’ve packed enough – looks like I’m off for a week not 3?!

At check in I breathed a HUGE sigh of relief, having failed to have weighed my bag one final time, I managed to come in at 19.7kg – the stupidly light allowance is 20kg for travelling this distance with a possible 4 seasons to pack for!

With my stomach rumbling something chronic with a mixture of both excitement and nerves, we headed to get some food after passing through security. I’m fine with flying but the mere idea of being sat on a plane for just shy if 13 hours, followed by a seven hour flight was not a pleasant thought. I never sleep on planes, no seriously – NEVER, & as per usual I couldn’t select a meal to cover my allergies so I knew damn well all the food would be riddled with peppers & shell fish or just look mighty unappetising!

Of course we were boarding during the match (National Shane Williams Day – as confirmed by the Dai Lama on twitter) with about half of Wales on our flight, primarily all in made up tour t-shirts with their dodgy given nicknames on the reverse, it was hardly surprising that huddles could be seen as we approached the gate – groups of people all crowding round iPads to try and catch as much of the match as feasibly possible before being called to board. We boarded at 0-5 to the Brumbies.

The plane was MASSIVE & as I was advised by Helen’s Dad the night prior – it would be very spacious. It was indeed, with a window seat just behind the wing and clearly right over where the wheels came up I was sat next to a couple who were flying home to Perth. They were very nice, didn’t smell, weren’t obese &, most importantly – didn’t have screaming kids. All obvious nightmares averted!

After fiddling around for a whole getting myself sorted & comfortable I settled in to the journey and looked at the film options that I had for the flight. I’d looked on the Singapore Air website prior & not seen too many that I actually wanted to watch, thankfully there was a far wider choice & so I was a happy girl – movie marathon and a half ahead!! I think in total in the first flight I managed 6 – let’s see, Identity Thief, Life of Pi, Parental Guidance, Quartet hang on that’s only 4? Oh no I give it a year too – ok 5, all in a row!! I make that pretty bloody good going!!

As predicted the food was pepper infested but having the food earlier at the airport I was not really too bothered.

Don’t worry, I didn’t take a photo of every meal I ate!! The non-slip try was a bonus, as was the proper knife and fork – larger than the one that we had breakfast with at Heathrow?!! Didn’t even try sleeping on this flight though as the timings were all a bit screwed. We arrived in Singapore at like 8 in the morning, it was already 28 degrees – SWEAT CENTRAL! Man am I glad I had the foresight to pack a change of top & undies in my hand luggage!!

We had a 2 1/2 hr stop over only in the airport which by the time we had wondered around to stretch our legs, visited the Butterfly Garden (no, really!) checked out the price of a massage & sat in a wifi area to touch base with home to let everyone know that leg 1 was done safe & sound and of course checking in on the rugby score. Thinking back that’s possibly not entirely true, there was a GOD ALMIGHTY bang about 5 mins before we landed which sounded like the wheel beneath is had fallen off or something – pretty bloody alarming! Then as we came in to land it felt smooth until we actually touched down which was more than a bit jolty – kind of like he’d forgotten to actually land it in time even tho he was bringing it down smoothly?!) we sat by the Koi Pond too – there I was spotting all the greenery everywhere, living walls & a shed load of large leaved green plants in the smoking area to take away the pollutants! 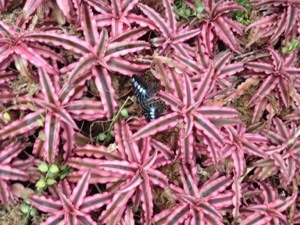 The onward leg was on a smaller plane & I was stuck in the middle, thankfully there was a spare seat next to me as the man on my right decided to sit with his legs a kimbo – not exactly very comfortable to sit next to! I decided to watch The Fall which I had downloaded the series of from iPlayer and as it was a 7 hour or so flight I managed to watch all of it, infuriating ending I must say, but I guess that it opens it up for a second series? The food was riddled with peppers once again & so all I managed was cheese & biscuits & 3 Ferrero Roche on the flight – very filling!! Thankfully it seemed to pass quite quickly though & I think I must have slept for an hour as when I woke with a start I felt suddenly hanging!

Coming through immigration was not too much of an issue & although my bag was last of our small group to come off the carousel, I thankfully was not waiting too long. Coming through customs I was in a line to be sniffed by the dog with all of my stuff – scary as, even if the pooch was only a black lab! Transit to the hotel was only about 30 min after dropping others at the 5* accommodation & I made it up the 30 floors to my apartment which I was sharing with Sophie, another tour co-ordinater. Very swish I have to say. I jumped straight in the shower pretty much & hit the sack hoping that sleep would happen after a brief chat with Sophie (who I hasten to add I’d never actually met before then!) Must remember to check in the morning if the water does go down the plug hole the other way as totally forgot this evening!