Mario rolls a fat one

An early start and a long bus journey out to the Vinales Valley this morning after another random round of the breakfast buffet, a strong coffee and a repackaging of the day bag to ensure that I had all that I needed for the away day. The final three joined us in the morning having arrived last night.

Marlon started filling us in on the history of Cuba and answering questions that we started wanted answering having been here over a day now. We watched the first part of a documentary but it was really quite difficult to follow it as although they spoke in English at times I just couldn’t read the subtitles. It was all about a young woman from Miami retracing her roots and trying to establish why her father (Max Lesnick – might need to check the spelling of that though)   was so passionate about fighting for his country and the revolution. I need to do a bit more reading up on who he was and see if I can’t find it online somewhere as I quite wanted to see the end. He was a close confidant to Fidel before he disagreed with his allegiance with the USSR and so for his own safety emigrated, like many other Cubans at the time to the USA and Miami.

We headed into the motorway after being pointed out many parts of the city that we had not caught on our walking tour yesterday. The American Embassy for example only in the last 18 months being used by the USA again. The barricade or rather embargo for Cubans is still in place. If they have family over in the USA, it’s not about just popping over to see them – they were only able to do so once every three years?! Even if it is to visit family there is no free travel – everything has to be done by a very restricted visa. As a result nearly every Cuban has at least one member of their family who is living in the USA.

We passed by what was the Havana Country Club and is now the University of Art in Havana. The story goes that Fidel and Che were playing golf one day and decided that the course would be an excellent location for an Arts University and so it happened and the country club and golf course were turned into that.

We asked about the motorway, it was pretty much empty and 3 lanes wide on each side. The USSR built all of the main roads on the island during their time of allegiance. Of course, not one has had anything done to it since – so many parts are in total disarray with pot holes all over the place. Only 10% of the population owns a car. If you were to buy one now it would cost (converted to Stirling) around £24,000 when the average monthly wage is £11. Shocking. It’s no wonder the old cars that came over at the time of the revolution and before are still being used as thier only mode of transport. Quite eye opening really. Driving in Cuba is hazardous to say the least with animals wandering on to the road on regular intervals, no use of lights on the cars and frankly crazy drivers. I sure as hell wouldn’t like to have to drive here at night. I wonder if they have to hold a license? Something tells me that they might not!!

Others slept or at least dozed on the way out to the Vinales region but I was taking in the views of the countryside. It was all very poor which I had expected and Marlon confirmed that most of the agricultural work was all done by hand or horse and plough. No modern machinery to help them. But the land was very green with the rainy season having just past. The earth was that rich reddy brown colour as well which reflects the sun beautifully in photos.

We stopped off for a pee and a drink not far from our walking destination of Vinales village. The loo situation was rather disconcerting as the walls between each cubicle were sort of mid chest height. Dignity out the window, if you’ve gotta go, you’ve gotta go! After clocking each other in the neighbouring cubicles it was down to business of the hovering over the fairly germified loo seat. It was a rest stop so to be expected in honesty. The views over the valley really where quite spectacular to put it mildly. It was here that I got chatting to the latest members of the group and established another rugby fan. Can’t ever go wrong on a holiday as soon as you find one of them. Cue discussion over the failure of the rugby World Cup and how George should have been used over Farrell whilst looking over this wonderful view. Can’t argue with that really!!

On from here we headed to the village of Vinales in the base of the valley from where we were doing our walk, at least one of the items I went back to Bath for would actually be used on this trip – the fleece & waterproof, no chance!

It was rather warm as we headed out passing past some of the local houses and spotting some more awesome cars. A new local guide – Flo – was taking the helm for the walk and his party trick was mother in law jokes. I think we were on seven before we lost count! The scenery was amazing, totally different to what we had seen before. Not really all that surprising seeing as this was out in the countryside and we’d previously been in a city!!

Snapping away as we all trundled along the path up to a tobacco field and were explained about the tobacco leaf drying process that goes into making the infamous Cuban cigars. There were some old men out working in the fields taking the top shoots out of the plants that were growing in the field that we walked through- this helps the plants to grow fuller. We even saw a caterpillar happily munching away on a leaf – not entirely sure I’d want that included in my Cuban cigar!! 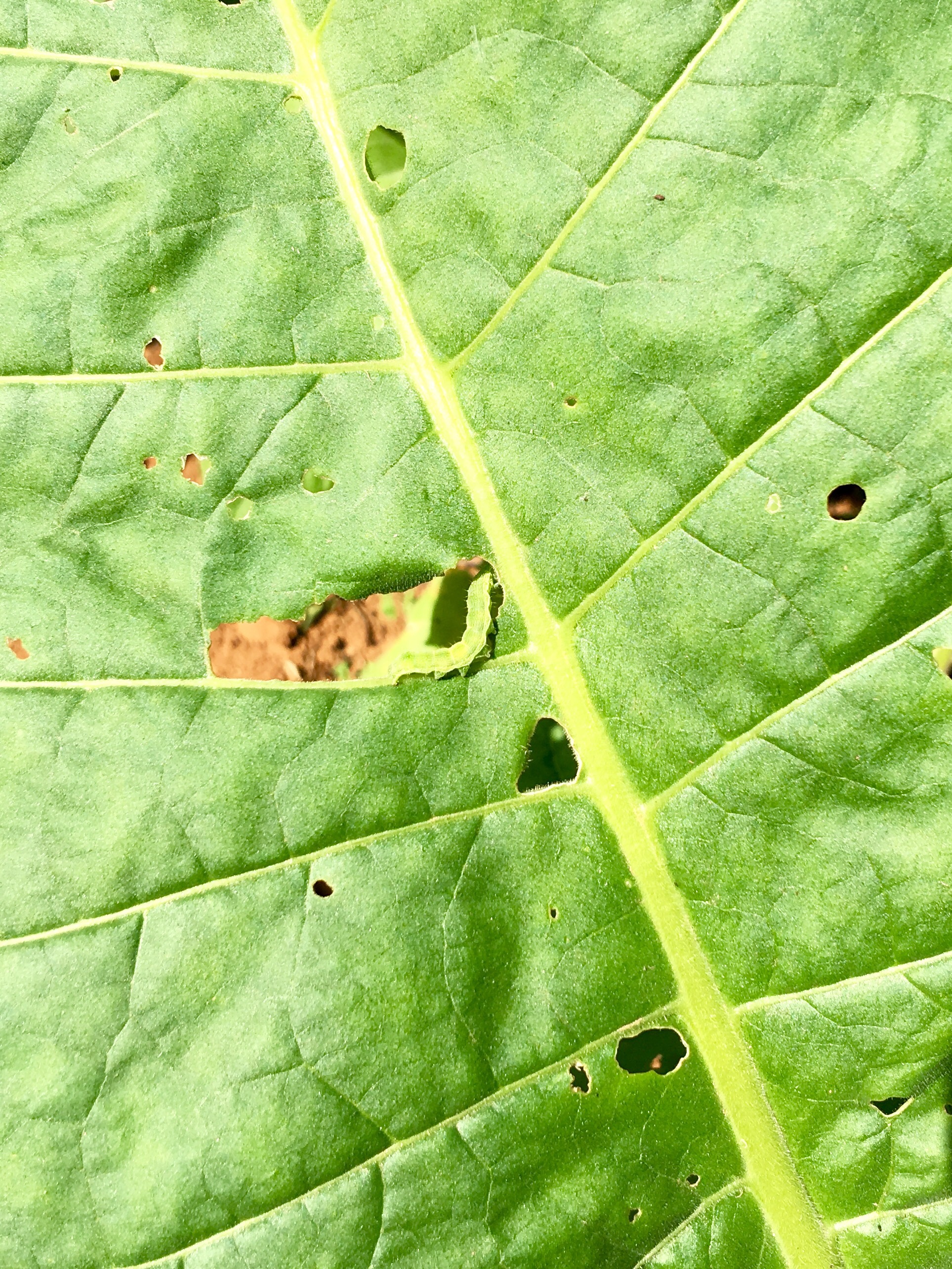 The Catepiller on the tobacco leaf having a good old munch

We walked in past the house which was so picturesque with the bright blue against the blue sky – really quite proud of this picture taken on my iPhone I must say! 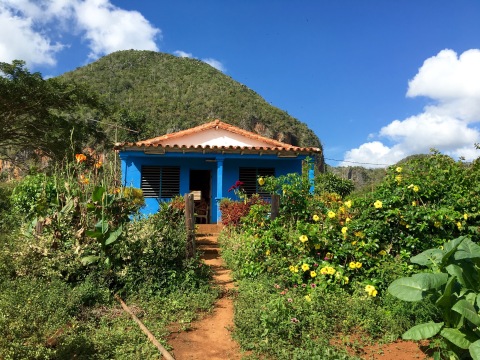 We headed on to the barn where the crops were all drying off after being picked fresh from the ground and explained a little more about the cycle of the tobacco plant. The growers have to give a percentage of what they earn through selling cigars and so on to the state – I think that he had mentioned around 90% goes to the state. Shocking really that they can take so much. We think he must have made more money selling 10 cigars to tourists such as ourselves at 25 CUC a bundle. 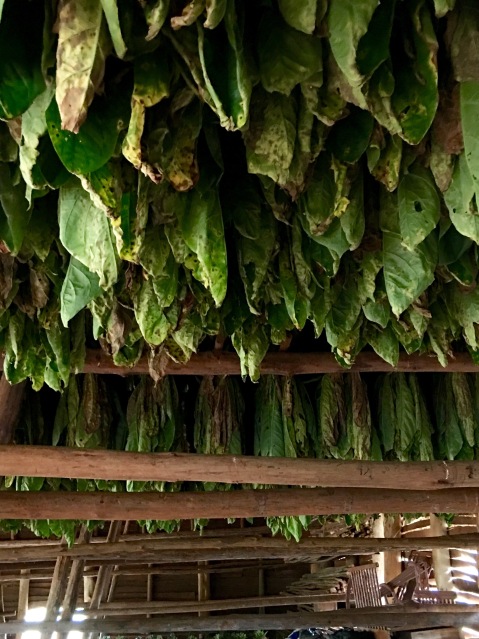 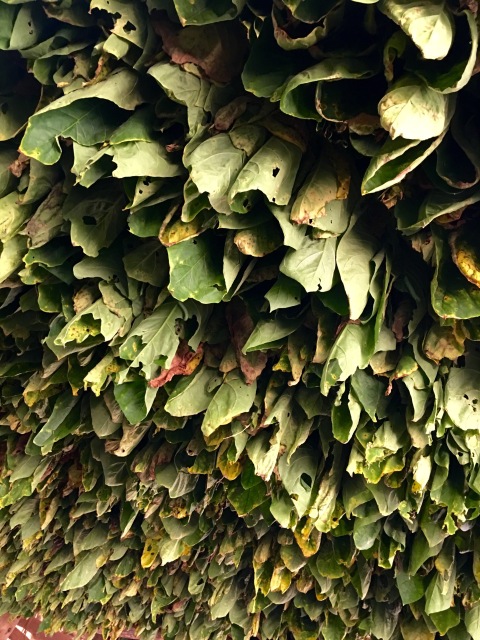 From here we walked on up to another farm house where we were going to see a cigar being made and find out a little more about the fermentation process which helps to create the taste of a Cuban cigar. Whilst we waited for a group before us to move on we took in the surrounding scenery and found out a little about what was being grown around us. It was primarily what we translated (we think) as arrowroot – they gave a lot of root vegetables in their diet! We also tasted a fresh (what I’d call a finger banana) mini banana – you can see Claire elegantly posing whilst pulling a banana off (not sure she realised that I had taken this!)

The Cuban cigar maker was an awesome experience, Flo was in full flow with his one liners and jokes, giggles were going all round. Below is a video I took of him rolling the cigar that we then went on to try smoking. Slow on the uptake, yours truly stepped in first off to try it. 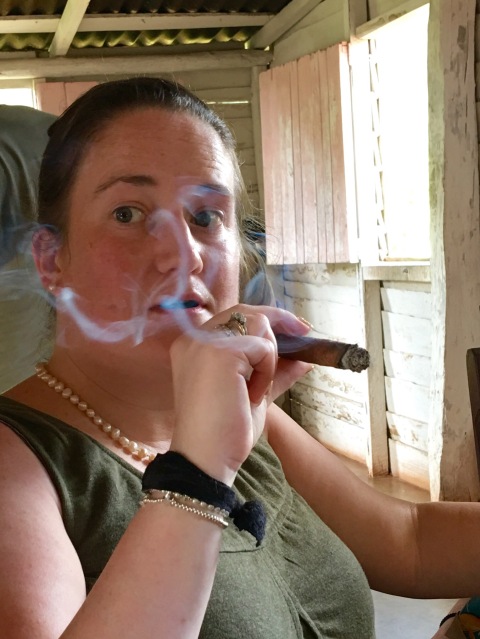 From here, as time was pressing on, we headed down to a country bar as it was referred as, it sold fresh coconut related cocktails – Pina Colada and Coco Locos. Far too good to miss that opportunity and so we all voted to stop here for a drink instead of having one in town before heading on somewhere for lunch. They were amazing and FULL of rum! I could definitely taste it to put it mildly! 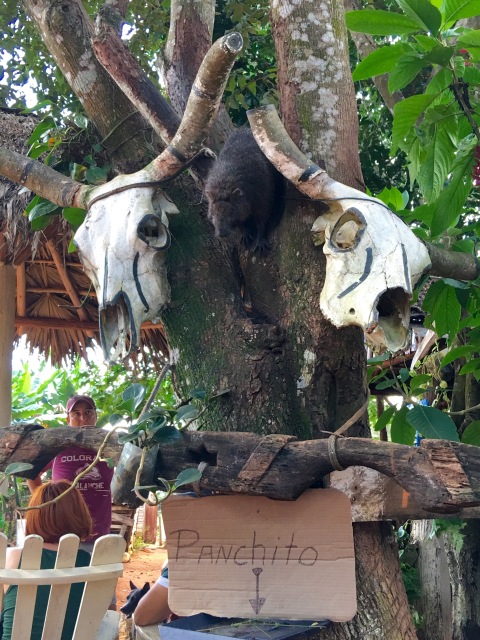 We headed back into the village and waited for a few people to change money as the queue was not bad here as it was in town. I stood and watched all of the old cars going past in the village, it was amazing – like being in a time warp again. It was absurdly hot but then it was the heat of the day at this point! After heading off for some lunch at a Cara particulares about a 20min drive away we headed back to Havana.

It was a long drive and of course Bilando was played again, we were getting better with the words and I managed to record Marlon singing along up and down the aisle of the bus. It was funny. I do think it was a ‘you had to be there’ moment but here it is anyway! We were also taught how to dance to reggaeton style music (essentially Cuban hip-hop) you kind of circle your head and then at the same time, put your hands to your shoulders and circle them too – I’m not explaining it very well but I also wasn’t dancing it very well either!!

It was a band featuring Marc Antony (JLo’s ex) as the singer and of course in Spanish so literally no idea what it’s about!! Here it is from YouTube – you can see what I’m trying to describe (BADLY)!

We headed out to Sloppy Joe’s across the road for a sandwich and a beer before bed (or dancing if you were going! Clearly I wasn’t) I was just bloody glad to get back into my air conditioned room and needed to pack ready to leave in the morning for our trip to Trinidad via a swimming opportunity in the sea – not to be missed!!

Posted on December 29, 2015, in Cuba. Bookmark the permalink. Leave a comment.