Well here I am in the last country on the list in South America. What a strange thought. Colonia was a bit of a sleepy seaside town and we had a bit of trouble trying to find some accommodation. The first hotel that we tried was full, the next one we tried there was no answer and the final one had turned into a restaurant! In there we were offered a bed in a family home which we could not turn down really as we were at the end of our tethers as it was pouring with rain and we were tired and fed up of carrying the bloody rucksacks. The owner kept on talking to us in Spanish and as soon as we told him that we didn’t understand he carried on blabbering away. Very amusing! (A Portugese man called Nanoel Lobo founded Colonia in 1680. It is in an important position being so close to Buenos Aires and as a result there are plans in the pipe line to build a huge bridge over to Argentina’s capital but it has been given much criticism on economic, environments and social grounds. There is a 19th century lighthouse, which you can go up, only on weekends though from 10:30 until noon, odd timings but there we go! There are some Jesuit ruins here and so as we didn’t get round to going to the ones in Argentina that we saw that adverts for back in Foz we felt fine having seen these!)

Boat journey over here was very quick and we had our bags on our knees the whole way as we didn’t realise that you had to check your bags in.

Ed and I are in one hostel that is just what I expect of a hostel, mass dorms and loads of friendly people. (El Hostal de San Telmo, 43006899, Carlos Calvo 614, 1102, Buenos Aires, Argentina) Chloe didn’t want to stay in a dorm and they had no rooms anywhere else so she is on her own around the corner. James, the Ozzie, is around the corner the other way and we have left a message with his hostel, as he was out when we popped around earlier.

Hoping to catch up with him later.

Better go, have no pesos and I am on a tab with Ed at the mo and I don’t want to go over my limit!

Loads of love to one and all and I hope to hear from you all soon,

HELS – Thank you for the updates. Oohh how scheming! Wish I was there watching it. Wish Phil all the best for his results.

MUM – tell me more, how much, how long? You know what I am talking about! 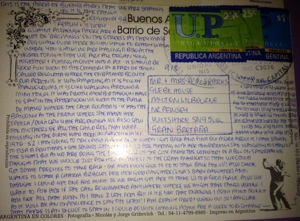