Odd title you may think. Sadly Chelsea has sold the star player that originates from this country but all the same I am still on the look out, I have seen no sightings though!!!

Bus journey, I am sure you will be glad to hear, was MUCH more comfortable than any of the others that I have previously been on. I even managed to get about an hours sleep, so I felt well rested when we arrived!! We had our bags checked at the border, was not pleased as all of my stuff would have taken HOURS to squeeze back in. Luckily they saw nothing and it was all over very quickly. Ed was worried as he had his gay porn in his bag and had not checked out what Uruguay thinks about such things, luckily it was not spotted, he was VERY pale for a while though!!! (it was quite a funny moment – I think that you had to be there though!) They were basically looking for any fresh food, so Chloe was not happy that they took all of her fruit: Luckily my choccie stash does not count as fresh food – phew!

Arrived in Montevideo this morning and it was like a ghost town being very early on a Sunday morning. It was most bizarre. It has very Eastern European like qualities which, of course, I rather like! We have a room to the three of us again and we are almost all in one bed! (Hotel Palacio tel 9163612, Bartolome Mitre 1364, Montevideo, Uruguay) We are going to take timer photos of us all in bed this evening which I am sure will cause much hilarity and the rest of the occupants will probably wonder what on earth we are all doing as I don’t imagine that the walls are very thick! We have a large balcony so Chloe has had some room to skip twice today and it gives us great views out over the port and some of the town. We have a brass double bed and antique furniture in the room, quite a hotel that we managed to spy in the book, I have to say! (Montevideo is the capital of Uruguay and about half of the country’s population live here – 3.2 million. The port links the country with the rest of the world. Plaza Independencia was the closest tourist site to the hotel in the centre of it is the Mausoleo de Artigas at which an honour guard keeps a 24 hour watch (except there was no-one there when we first arrived!) it is topped by a 17m 30 ton statue of the country’s independence hero. On one edge of the square was the Palacio Salvo that was the continents tallest building when it opened in 1927 with 26 storeys and is still the tallest in the city. It was from here that British agents spied on the German destroyer Graf Spee that was then at anchor in the harbour. We didn’t see masses of the city as it was a weekend and so everything was deserted.)

Seeing as the computer is making so much noise it feels like it is about to explode I had better sign off now, also the connection is really slow and I am paying well over the odds.

Love and hugs to one and all as always, missing all of you,

CHRISTOPH LAMBIE PIE – so good to hear from you sweetie and your flood situation out in China. Glad that you are still in the land of the living. Looking forward to chatting when we both return. Have a great time travelling and keep in touch – preferably more often than you have!!!

LAURA – Glad you are still living the highlife up in the smoke. Camden market sounds just like my scene must go up there one day. (Preferably with and empty wallet and no plastic!)

BATS – Waitrose mag, if any articles get put in let Mum know and she will go and buy it for me!

HANS – have a wicked time in Canada. Look forward to hearing more about you on your return.

TOM – Did I already send you a personal one? Can’t remember if it went or not. Glad that you got the card and that the party went well.

ALEX – good to hear from you. I love Sinaia. Enjoy your cousin’s wedding; take some photos of you all dressed up.

ERICA – I am not back in bath until the end of Fresher’s weeks, not sure how jet lagged I will be on the weekend of it. Give me a bell though and leave a message on my answer machine and I will call or pop in or whatever to see how you are. Enjoy the rest of your time out in Romania. Lucky girl!

NEDDY – have a good flight to Taiwan; let me know you arrived safe and sound!

HELLS BELLS – News on the court case my love?? How is it looking, is he going down or is Phil getting caught out? 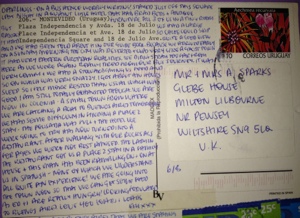