I am pretty darned sure that there are not that many bosses out there that are as accommodating as mine.

I checked with the pub across the road, that I can see from the window that my desk is against, that they would indeed be showing the first of the midweek matches in the hope that I would not have to travel far to see it and be able to nip back tot he office after it in a flash. I think I was quite a sight to behold to the group of 6 or so construction workers as I arrived a little later that kick off after trying to complete something in the office first. I pulled out not only my phone but also my iPad mini so that I could get my work emails in there whilst watching. I did get a few looks from them when shouting the usual ‘ave ‘im at the screen and of course cheering for the tries as well as the penalties and conversions.

My fellow watching crew left at half time however and I was left, still catching work emails on the iPad as well as tweeting from my phone, all alone in my area of the pub. Sadly that didn’t last long and several pensioners joined me not least the couple below

Company in the second half

They really were quite bemused by me and the fact that it possibly looked like I was staring right at them and shouting, but they did come in and CHOSE to sit right under the screen, there were plenty of other tables around. I had the following snippet of conversation with them:

I need very little to need me to enthusiastically support louder and that was coming for a while!! Safe to say I gave them a BEAMING smile when I left!! 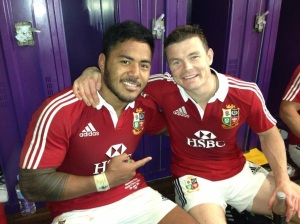 The lovely Tommy B and Rory Best post match

The Youngs brothers – quite an achievement to be in the same England Team, but Lions too?!