← First MidWeek match
This time next week & all that jazz x2 →

The first of the Saturday matches against the Reds spent in the Royal Oak, with friends needing to be in work to cover an audit taking place over the weekend it was only going to be a quiet one. Several others in the pub as always & a couple who fly out on Tuesday who were, like me, trying to work out how many clothes the crowd were wearing so as to work out how many warm clothes we need! Didn’t manage to be very successful in working it out as it was also raining.

Stuart Barnes had, once again, clearly been using a word of the day loo roll as this week he managed, somehow, to squeeze in impresario – not quite sure how it fitted in?!!

Love the Sky Sports as for the Lions which I’d only really taken in today, I can’t find a clip of it on YouTube at the moment which is really annoying me but will add it at a later date if I can find it 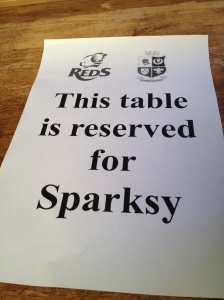 The table saver in the Royal Oak for the Reds match 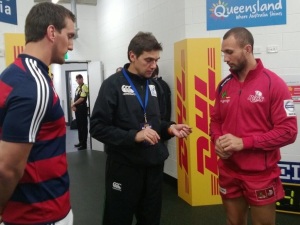 The coin toss before the match with Warberton & Quade Cooper

Poor Tommy B – how did I manage to miss him breaking his hand during the match :O(

Two weeks and I’ll be in the very same city that the match was played in today – even if I don’t actually make it into the stadium :o)

← First MidWeek match
This time next week & all that jazz x2 →