A day in the rainforest

Our second day in North Tropical Queensland took us up to the Rainforest, something we were all very keen to see – again there were 10 of ‘my lot’ as well as a few others too. The day was beautifully sunny and warm, just what we were expecting from the weather up here. Very handy having them pick us all up from the hotel I have to say, the location of the hotel (the Shangri-La!)being right in the middle of the marina was wonderful.

We headed up to Kuranda on the sky rail and booked to come back on the train – another day trip with a good 10 or so of my group members joining. The village is tiny with only a population of around 1,500 people but it is a set of markets selling pretty much anything that you need as a tourist. A total tourist trap in my opinion but it was more the travel to and from the we were all going for.

We headed up in a cable car which stopped off at a couple of points on the way up so that you could get out and walk in amongst the rainforest on one of them and see the breath taking views out. One of the things to look at was Barron Falls, as you would expect from the name – a waterfall. It was merely trickling at the moment owing to the time of year but you can tell at it would be quite a spectacular sight.

This youtube video (not mine!) gives you an idea of the sights as we went up. I’d suggest turning the sound down though as the wind is pretty much all you can hear – there is no running commentary!

Ed, Kay & Steve in our ‘pod’ on the way up & over the rainforest on the Skyrail

Me with Sandra & Chris in the pod 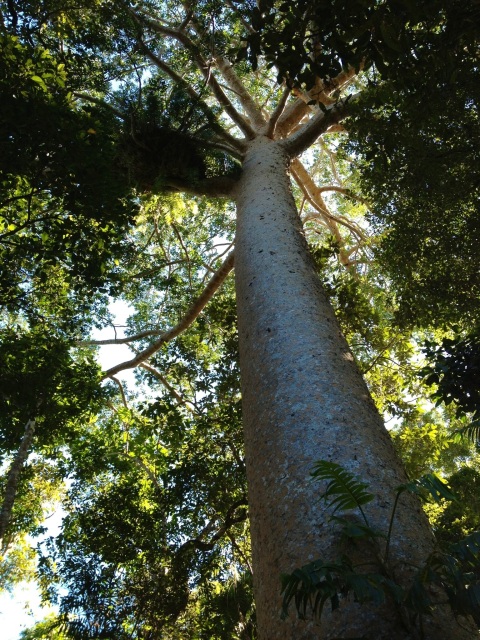 Just slowly making our way up and over the rainforest was simply amazing, with a birds eye view of the place as we all soaked in the views back over Cairns as well as just looking down into the actual rainforest itself. I didn’t see as many birds as I thought that I would though, which I found rather odd (unless you of course count the turkey which was gobbling around at the Barron Falls stop?!). We saw quite a few very large butterflies including the impressive Ulysses butterfly which is a bright turquoise colour.

After a pint at the top a little meander around the town and a snoop at some of the markets and shops we headed to the train station as we were going to be getting the scenic railway back to where we were dropped off. The station in Kuranda is a very quaint little place, I could almost see a Miss Marple or a Poirot being filmed here! Of course the train that we were on was a very old fashioned one, with very old school carriages, I most definitely would not like to do this trip in the scorching heat, it would be seriously stuffy. It’s a 34km stretch that seemed to take forever to travel with 15 tunnels but most importantly some pretty spectacular views out into the rainforest and back over Cairns. We were all tho definitely looking forward to disembarking when the time came. 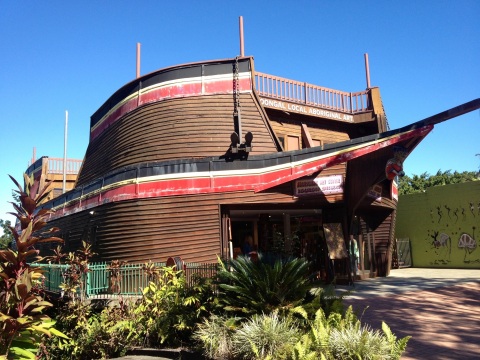 An art gallery in the shapre of an old boat selling (but I didn’t buy) Aboriginal Art & decorated didgeridoos! 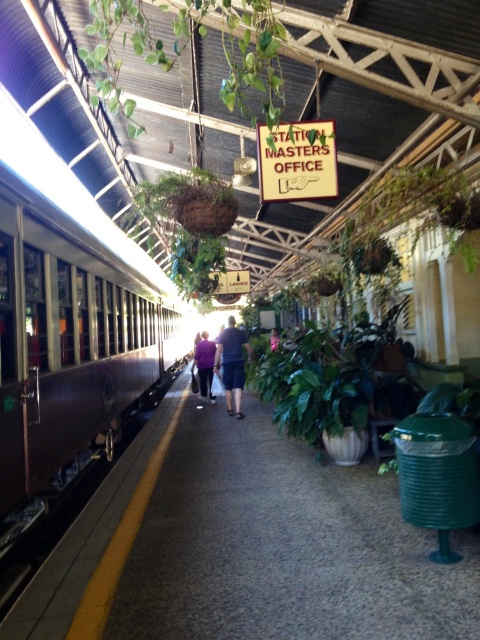